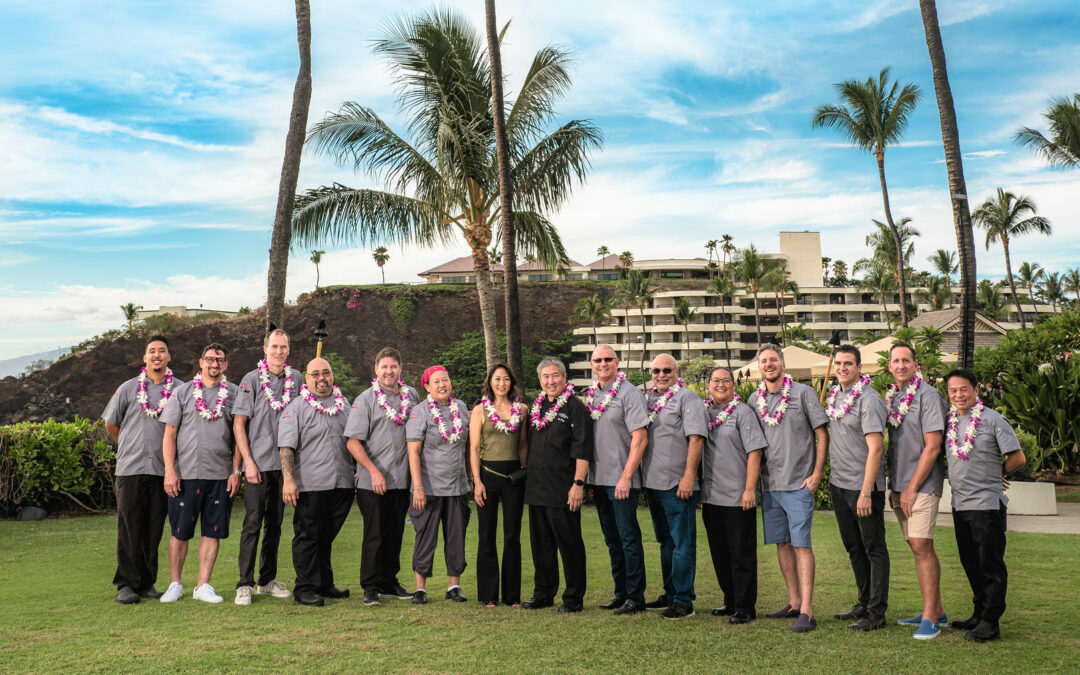 HONOLULU, HI (May 19, 2022)—Eighty four of the nation’s top chefs and culinary masters will be joined by dozens of winemakers and mixologists to showcase their talents this fall at the Twelfth Annual Hawaii Food & Wine Festival (HFWF) presented by First Hawaiian Bank and Mastercard®. Known as the premier epicurean event in the Pacific, the Festival spotlights Hawaii as a culinary destination—promoting local chef talent alongside the diversity of rich agricultural offerings grown and raised in the islands. What began in 2011 as a three-day festival with 30 chefs in Waikiki has grown to a multi-island experience connecting all aspects of Hawaii’s culture, cuisine and cultivation with the world through the spirit of food and beverage.

The highly anticipated lineup of HFWF22 events, as well as participating chefs and partners, were announced at a private reception held at Mariposa at Neiman Marcus on Wednesday evening. This year, the Festival will host 12 events spanning Kaanapali, Maui, the Island of Hawaii and Oahu over three weekends from October 21-November 6, 2022, with additional events and hands-on experiences announced in the coming months.

Boasting a roster of first-time and returning HFWF talent, Festival attendees will be treated to innovative dishes that highlight the bounty of locally caught, grown and raised ingredients from Hawai‘i. In fact, HFWF is the only festival that requires participating talent to use local products sourced from Hawaii’s farmers, fishermen, ranchers and purveyors in their creations—affording them a deep understanding and appreciation for Hawaii’s natural resources.

The 2022 lineup also includes fan favorites like the 25th Annual Roy Yamaguchi Golf Classic and HMAA Presents Keiki in the Kitchen®, as well as the return of the Festival’s signature grand tasting event pairing 20 chefs and 20 winemakers at the Hawaii Convention Center—Hawaiian Airlines Presents On Cloud Wine.

“The past two years has impacted the food industry especially hard,” shared HFWF Chief Executive Officer, Denise Yamaguchi. “This year, the Festival is dedicated to the resiliency of our collective industries—from farmers and fishermen, to chefs, restaurant owners, winemakers and more—and celebrates the spirit of innovation and adaptation in light of extraordinary circumstances.”

Last year, HFWF partnered with nine nonprofit and aina-based organizations to coordinate hands-on Malama Aina volunteer experiences that encouraged residents and visitors alike to care for Hawaii—both the culture and natural environment. Hundreds of volunteers, comprised of participating chefs and festival attendees, built a stronger connection and appreciation for the ocean, land and local communities as they worked the land as their hookupu or gift back to the islands. The Festival plans to continue this initiative, committed to maintaining sustainability as a guiding force for the Festival for years to come.

Tickets open to the general public for purchase on Thursday, May 26. Click here to purchase tickets, view event details and chef lineup. Since its launch, HFWF has raised over $3.1 million to support local agricultural and culinary programs. Stay connected—follow HFWF on Twitter/Instagram @HIFoodWineFest and Facebook at @HawaiiFoodandWineFestival.

ABOUT HAWAI‘I FOOD & WINE FESTIVAL
The Hawai‘i Food & Wine Festival is the premier epicurean destination event in the Pacific. The Festival features a roster of more than 150 internationally renowned master chefs, culinary personalities, sommeliers, mixologists, and wine and spirit producers. Co-founded by two of Hawai‘i’s own James Beard Award-winning chefs, Roy Yamaguchi and Alan Wong, the Festival showcases culinary experiences, wine tastings, cultural engagement and exclusive dining opportunities with dishes highlighting the State’s bounty of fresh, local produce, seafood, beef, poultry and spices. Since 2011, the Festival has given over $3 million to support local beneficiaries committed to culinary and agricultural education, sustainability and cultural programs in Hawai‘i.