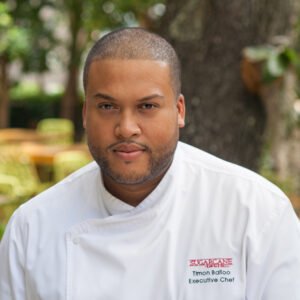 The culinary heart of Chef Timon Balloo’s food draws from a broad range of global flavors. From his Chinese, Indian-Trinidadian heritage to his classic European training, to the diverse kitchens where he built his career, each step has led Balloo to become the chef he is today.

Born to multiethnic parents, Balloo grew up with food steeped in culture. A typical dish in his home was stir-fried Caribbean vegetables with Asian spices. With a childhood rich in epicurean curiosity, it came as no surprise when he pursued cooking as a career.

Timon Balloo enrolled in Johnson and Wales University, graduating with a degree in culinary arts and the experiences of working internationally with 2 Star Michelin Chef Dominique Michou at Hotel Métropole Brussels in Belgium.

Once home, Balloo—eager to continue honing his cooking skills—immediately worked with some of Miami’s iconic chefs such as James Beard Award Winners Chef Allen Susser and Michelle Bernstein. Working alongside Bernstein as part of the opening team of Miami’s Mandarin Oriental Hotel—Azul Restaurant—Balloo cultivated his expertise of fine dining cuisine. The experience also exposed Balloo to the dedicated work ethic and results of receiving the Mobile 5 star, AAA 5 Diamond and Esquire Magazine “Best New Restaurant.” Thereafter, Balloo rose to the position of Junior Sous Chef.

Continuing his search for knowledge, Balloo later worked with the avant-garde molecular pioneer Sergi Arola (formerly of El Bulli) at the two Michelin-starred Madrid outpost of La Broche in Miami. Ready and yearning to helm command of his kitchen, Balloo became the chef of notable New York City eatery Sushi Samba where he focused on Japanese seafood techniques and flavors.

An opportunity to reconnect with Samba Brands Management in 2009 brought Timon Balloo back to the growing restaurant group as Chef Partner of SUGARCANE raw bar grill, which opened in 2010. It was here that he combined everything he had learned about global flavors and techniques. After the restaurant’s debut, SUGARCANE raw bar grill was named a James Beard Awards semifinalist for “Best New Restaurant” and Balloo for “The People’s Choice Best New Chef” by Food & Wine magazine. The wild success of this Miami midtown eatery spanned a decade, including numerous accolades and two additional outposts in Las Vegas and Brooklyn.

In 2019, Balloo announced the opening of his first independent concept, Balloo: Modern Home Cooking in downtown Miami, a tribute to his Trinidadian Indian-Chinese heritage. Balloo garnered an out pour of national distinctions from recognition by the New York Times as one of the “16 Most Influential Black Chefs in America” to 2020 James Beard Award Nomination for “Best Chef South” and becoming the 2020 recipient of the Johnson and Wales Honorary Doctorate of Culinary Arts.

After a challenging two years of the pandemic, Timon Balloo decided to scale down the size of his operations closing all but one—newly launched The Katherine Fort Lauderdale. This unit marks the most important core mission statements of Balloo—great hospitality, family and amazing food. Already buzzing with numerous local accolades, Balloo’s enthusiasm and accomplishments are a testament to the passion and love he has for this industry. He will continue his culinary story, celebrating culture, food and flavor while bringing together what inspires him at the core.