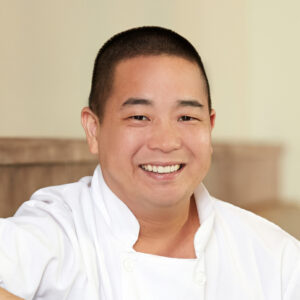 Wade Ueoka is Co-owner/Chef of MW Restaurant and Hawaiian Airlines’ Featured Chef. Specialists in Hawaii Regional Cuisine, Ueoka and his wife Michelle Karr-Ueoka opened their first joint venture, MW Restaurant, in Honolulu in 2013. Both have traveled around the world, and draw inspiration from their journeys, but none greater than the melting pot of Hawaii and its local bounty. In February 2014, MW Restaurant was nominated by the James Beard Foundation in the category of Best New Restaurant.

Ueoka was born and raised in Honolulu, and graduated from Mid-Pacific Institute. He took his first job as a fry cook at Zippy’s. Though his beginnings were humble, they did not deter him. Two years after working at Zippy’s, he landed a job as a prep cook at Alan Wong’s, and seven years after that, Ueoka rose to become chef de cuisine. Wade Ueoka has a culinary degree from Kapiolani Community College, and is a veteran of notable stages at The French Laundry and Las Vegas’ Alex.