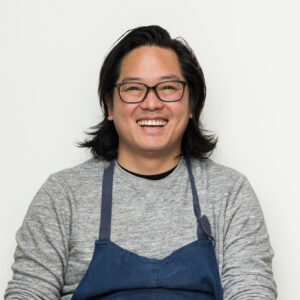 From an early age Peter Cho, a native Oregonian, developed an intuitive grasp of cooking from his Korean immigrant mother. Cho cut his teeth in New York City working for April Bloomfield for nearly a decade before returning to Oregon to be closer to his mother, who was diagnosed with cancer and undergoing treatment. He and his wife, Sun Young Park, opened Han Oak, a Korean-American restaurant merging classic Korean flavors with local ingredients and inventive western techniques.

In its debut year of 2016, Han Oak garnered Best New Restaurant recognitions from James Beard Foundation, Eater National, GQ and Esquire magazine, in addition to Peter Cho being named as one of Food & Wine Magazine’s 2017 “Best New Chefs”. The Cho’s recently opened Toki in Downtown Portland in January 2021 and continue to navigate through the pandemic by balancing work life and home life, while raising their sons Elliot and Frankie.