After receiving a business degree from the University of Colorado and spending four years in the corporate commercial real estate, Island-born Ed Kenney took a contemplative year off to backpack across the globe, immersing himself in the myriad cultures, aromas, and flavors that make up life on this planet. On a street corner in Hanoi, over a steaming bowl of pho, he experienced an epiphany: “Food is the unifying fabric of humanity, connecting us to the earth and each other.”

Kenney spent the ensuing decade absorbing everything he could about cuisine, completing the Culinary Institute of the Pacific’s reputable culinary arts program, and training in some of Honolulu’s top restaurants. He took the leap and opened his first restaurant, TOWN, in 2005, followed by Kaimuki Superette, Mud Hen Water, and Mahina & Sun’s. His restaurants are lively gathering places guided by the mantra, “local first, organic whenever possible, with aloha always” and have received accolades in local and national press. In 2015, he founded FoodShed Community Kitchen which provides incubator kitchen space for small local food-centric businesses. And in 2016 he made his television debut as the host of PBS Food’s latest national food/travel/genealogy series, Family Ingredients.

Kenney sits on the Board of Directors for MA‘O Organic Farms and the Kokua Hawai‘i Foundation and is a member of the Monterey Bay Aquarium’s Blue Ribbon Task Force. 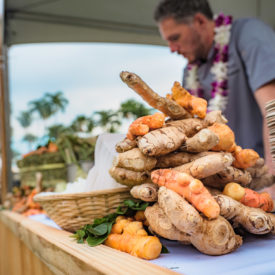