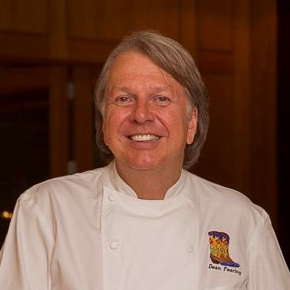 As he works the room at Fearing’s in his custom-tooled Lucchese cowboy boots, James Beard Award winner and culinary icon Chef Dean Fearing seems more like everyone’s best friend than the owner of one of Texas’s most critically acclaimed restaurants.

Growing up, Fearing learned his way around the kitchen from his grandmothers, who knew southern cooking like farmers know weather. In the early ‘80s, he began perfecting traditional regional dishes, barbecue, and Mexican street food recipes using locally sourced ingredients (he was “buying local” long before it was cool), developing what the world now recognizes as southwestern cuisine.

A graduate of the Culinary Institute of America, which later recognized him as a “Pioneer of American Cuisine,” Fearing spent more than two decades as executive chef of The Rosewood Mansion on Turtle Creek before opening his namesake establishment, Fearing’s, in the Ritz-Carlton Dallas in 2007. “Mr. Fearing was a real catch for the Ritz,” Frank Bruni wrote the next year in the New York Times. Since then, Dean has published a successful cookbook, The Texas Food Bible, and he and his recipes have been featured in The New York Times, USA Today, Newsweek, Food & Wine, Southern Living, Forbes, Fox News, Bon Appétit, Garden & Gun, Robb Report, Conde Nast Traveler, The Food Network, Texas Monthly, Guitar Aficionado, and elsewhere. His many accolades include the Silver Spoon Award for sterling performance from Food Arts.

If you’ve met him, it won’t surprise you that the charismatic Dean Fearing is also a television personality. For 22 years, he starred in a regional show called Dean’s Cuisine, and he starred in Entertaining With Dean Fearing on TVFN. Dean has appeared on countless news and talk show programs, including Good Morning America, The Today Show, The View, and Regis and Cathy Lee.

Named “Restaurant of the Year” and “Table of the Year” by Esquire, and ranked #1 in Hotel Dining in the U.S. by the Zagat Survey, Fearing’s sources steaks from Texas ranches; buffalo from the range of Lawton, Oklahoma; fish and crab from the Gulf; and produce from nearby farms. Exquisite but deceptively simple, Dean’s recipes – from the legendary tortilla soup to the rib eye cooked over live mesquite to the achiote-glazed antelope Dean sources from his friend’s ranch – “crackle” to quote a review in the Dallas Morning News. That same reviewer wrote, “You’d have to be in an awfully churlish mood not to feel a little thrill when you set foot in Fearing’s.”

And as if being the best chef in the southwest isn’t rock-and-roll enough, Dean is also an aficionado of early Fender Telecaster electric guitars, a guitar collector, and the guitarist in The Barbwires, an all-chef alternative country group. As musician and chef, he has entertained Willie Nelson, Sammy Hagar, AC/DC, Steve Winwood, and ZZ Top. He has also cooked for many dignitaries, movie stars, and even presidents, but if you want those stories, you’ll have to ask him for them yourself.