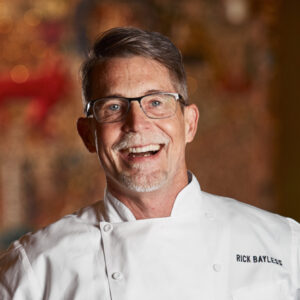 Most people know Rick Bayless from winning the title of Bravo’s Top Chef Masters, besting the competition with his authentic Mexican cuisine. His highly-rated public television series, Mexico: One Plate at a Time, is broadcast coast-to-coast and his nine cookbooks have earned multiple high-profile accolades.

Located in Chicago, Bayless’ Frontera Grill and Topolobampo have each received the “Outstanding Restaurant of the Year” designation from the James Beard Foundation — an unprecedented feat for side-by-side restaurants. His wildly popular fast-casual Xoco has been around since 2009 and Tortas Frontera at Chicago’s O’Hare airport has changed the face of airport dining.

In 2016, he opened Frontera Cocina in Disney Springs. In 2018, Bayless expanded his Clark Street restaurants by opening Bar Sótano, a Oaxacan-inspired mezcal bar with modern Mexican bar food. Tortazo, his new fast-casual concept, debuted in 2020 in Chicago’s iconic Willis Tower, with plans to open an outpost in New York City in fall 2021.

In 2012 and again in 2014, Bayless joined forces with Lookingglass Theatre Company to create Cascabel, the story of food’s capacity to change lives. Cascabel’s audience shared a meal with the cast of actors, musicians, singers and circus performers as the tale of unrequited love resolved into magical beauty.

Always a philanthropist, Rick Bayless, and his staff established the Frontera Farmer Foundation in 2003 to support small Midwestern farms. To date, the Foundation has awarded nearly 200 grants totaling nearly $3 million. He also launched the Frontera Scholarship, a culinary school scholarship for Mexican-American students in Chicago.

In 2019, Bayless founded Impact Culinary Training, a restaurant job readiness program on the city’s west side. And in 2017 he established the Bayless Family Foundation to support the city’s vibrant theater scene with grants to Chicago theater companies totaling $1.5 million to date.

The Government of Mexico has bestowed on Bayless the Mexican Order of the Aztec Eagle–the highest decoration bestowed on foreigners whose work has benefitted Mexico and its people.