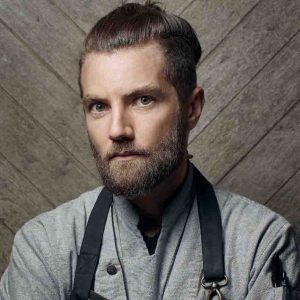 Marcel Vigneron has dedicated his life to gastronomy and honing his skills as a chef. He’s an artisan with an affinity for culinary knowledge, who uses a knife as an extension of his hand, the kitchen as a workshop, and the earth as a grocery store.

Vigneron attended the acclaimed Culinary Institute of America (CIA) in New York and achieved his Associate’s degree in Culinary Arts, as well as a Bachelors Degree in Hospitality Management. At the CIA, he enrolled in the teaching assistant program where he served as the Sous Chef at the school’s award-winning Ristorante Caterina de’ Medici.

Since then, Vigneron has continued to pursue the progression of gastronomy and at the young age of 25 gained national notoriety in season two of Bravo’s hit reality series, Top Chef where he made it to the finals finishing “Runner-Up”. He has worked all over the globe with world-renowned chefs, including Joël Robuchon (named “Chef of the Century” by the Gault Millau) and Michael Mina (awarded “Best Chef of 2002” by the James Beard Foundation during the time of Marcel’s employment).

Vigneron spent time in Barcelona, Spain, where he studied at El Taller with famed Chef Ferran Adrià of El Bulli restaurant—named the top restaurant in the world in 2007 by Restaurant magazine. He worked under José Andrés as the Executive Sous Chef of The Bazaar at the SLS Hotel in Beverly Hills, which received the ﬁrst 4 star review by the LA Times in ﬁve years. He participated in Top Chef All-Stars at the end of 2010 and premiered the ﬁrst season of Marcel’s Quantum Kitchen on the SyFy Network in February 2011.

Marcel Vigneron competed on The Food Network’s The Next Iron Chef in November 2012 and on Iron Chef in 2013. Food Fighters, Americas Best Cooks, Cutthroat Kitchen “Superstar Sabotage”, Chopped “Celebrity Chef Charity Version”, Top Chef Duels, and Tournament of Champions are a few of the more recent shows that have featured him.

Vigneron was the Chef/Owner of One of LA’s Best Restaurants, Wolf—which served Modern California Cuisine with style, as well as Tacos Lobos which served authentic Mexican street tacos. He designed the restaurants, created the menus and manned the helm of these establishment for ﬁve years until ﬁnally deciding to shutter its doors in 2019 to focus on event production and entertainment. Vigneron currently resides in Malibu and runs his successful Events Production and Catering Company, Modern Global Tasting Inc.