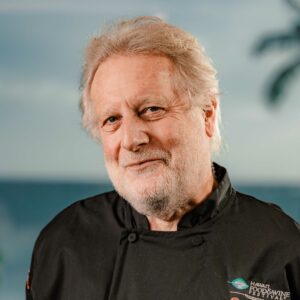 As a native Californian, Jonathan Waxman grew up in a family that celebrated the culinary arts. After receiving the Grand Diplôme from La Varenne Cooking School in Paris, he moved back to California to work at Domaine Chandon and then with Alice Waters at the legendary Chez Panisse. In 1979, he became the executive chef of Michael’s in Santa Monica, where he developed his version of California cuisine. He made his mark on New York in 1984 with the now iconic Jams.

Today, Waxman is the chef/owner of Barbuto in Manhattan’s West Village, Jams at 1 Hotel Central Park, and Baffi in Atlanta. He is the recipient of many accolades, highlighted by the 2016 James Beard Award for Best Chef: New York City. Waxman’s numerous TV appearances include Top Chef Masters, Top Chef, Recipe for Deception, and MasterChef. His charitable work includes Alex’s Lemonade Stand Foundation, Citymeals on Wheels, and many others. Jonathan Waxman is the author of three cookbooks including: “The Barbuto Cookbook,” “A Great American Cook,” and “Italian, My Way.” Waxman lives in Manhattan’s Upper West Side with his wife and three children.