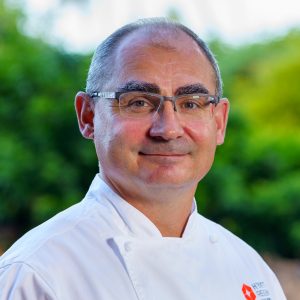 David Flegel is the Executive Chef for Hyatt Regency Maui Resort and Spa, leading and managing staff, overseeing the culinary offerings of the resort’s various restaurants, and implementing and incorporating his unique barbeque flavors as well as his international expertise in Indonesian and Asian cuisines throughout the resort’s dining destinations.

Chef Flegel has over two decades of experience in the culinary field and his various skills include restaurant operations, menu development and staff training. During his career he has catered to President Bill Clinton, Prime Minister Jean Chrétien of Canada and Her Majesty Queen Elizabeth. He began his culinary journey in 1995 as Chef de Cuisine at Hyatt Regency Saipan in the Northern Mariana Islands. Flegel then planned, organized and opened a new Italian restaurant in the South Pacific island paradise where he stayed for two and a half years. In 1998, Flegel moved over to Hyatt Regency in Santiago where he managed the kitchen and also traveled to Paris and Berlin to train chefs and staff in some of Hyatt’s top European hotels.

In 2000, Flegel became the Executive Sous Chef for the Grand Hyatt Hotel in Jakarta where he planned and organized menus, trained staff and opened a new restaurant that incorporated an open kitchen. In 2006, Flegel joined Hyatt Regency Calgary as Executive Chef, where he served the Duke and Duchess of Cambridge, Prince William and Kate Middleton. In 2018, Chef moved to Seattle to help open and create the award-winning lakeside Water’s Table restaurant at Hyatt Regency Lake Washington before joining Hyatt Regency Maui this year.

Chef Flegel will work closely with other colleagues to continue Maui’s sustainability initiatives as well as implement new kitchen hygiene and dining room standards led by the newly appointed Hygiene and Wellbeing Leader. Highlights include the installments of plexiglass shields in all kitchens and dining rooms, socially distanced tables, mask requirements for all staff, chefs utilize gloves, and deep cleaning and sanitizing all kitchen equipment and silverware. Hyatt Regency Maui currently offers disposable printed menus, QR codes for menus that link to the digital order system at the restaurants, to-go service is available at all outlets and in-room dining can be ordered with contactless delivery. The resort is accredited through GBAC (Global Biorisk Advisory Council) and has an in-depth hygiene and food safety standard operating procedure to ensure a safe and secure food delivery process. 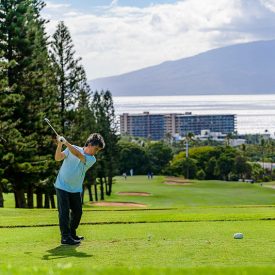