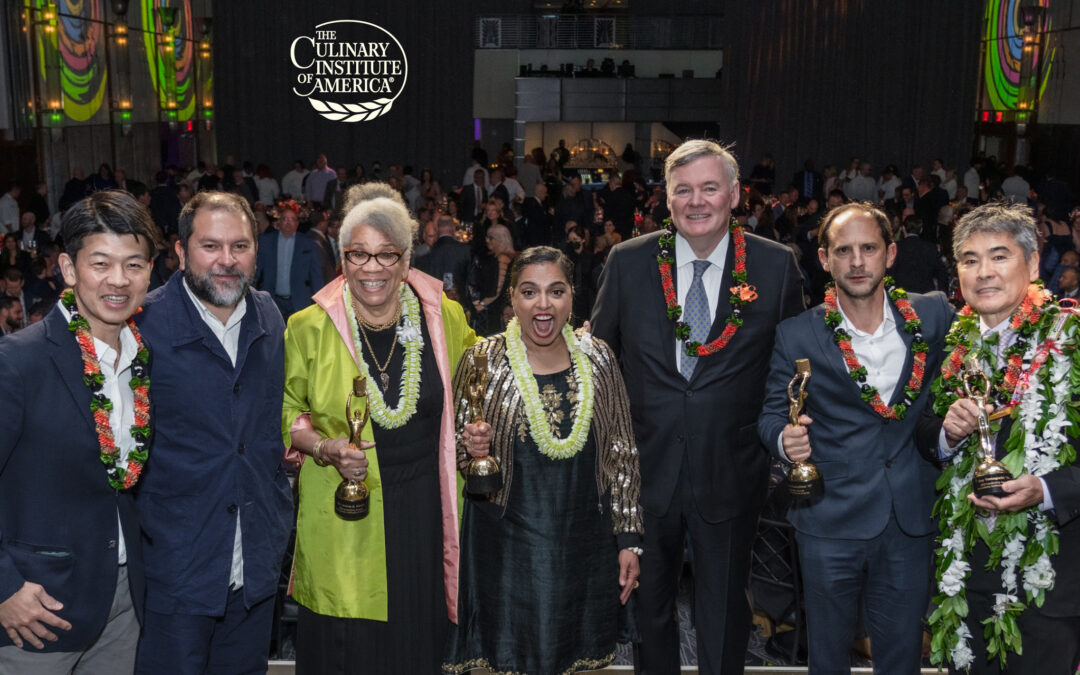 Hundreds of hospitality industry leaders, celebrity chefs and other luminaries from business and entertainment joined The Culinary Institute of America (CIA) in honoring six Champions of Global Cuisine at the 2022 CIA Leadership Awards held on Monday, May 2 at the Ziegfeld Ballroom in New York City. Among the honorees was Hawai‘i’s very own celebrity chef Roy Yamaguchi, whose more than 30 restaurants—including Roy’s Restaurants, Beach House by Roy Yamaguchi and Eating House 1849, among others—as well as numerous TV shows and books, have made him a household name across the world.

Yamaguchi—a 1976 graduate of the prestigious culinary college—was celebrated alongside CIA Alumni including Maneet Chauhan ’00, Enrique Olvera ’99, Pedro Miguel Schiaffino ’97, Jungsik Yim ’05, as well as Dr. Jessica B. Harris. This year’s honorees received the Augie™ Award for their dedication to cultivating an understanding, adoption, and love of world cuisines among countless individuals.

“Through their lives’ work, this year’s honorees have demonstrated the connective power of food and underscored that we are more alike than we are different,” said CIA President Dr. Tim Ryan. “I can’t think of better role models for our students, the torchbearers of tomorrow.”

Created by the CIA in recognition of famed French chef Auguste Escoffier, the college has been honoring food and hospitality industry leaders who exemplify an unwavering pursuit of excellence, creativity and professionalism with the Augies since 2007. Notable recipients of the award include Jacques Pépin, Shep Gordon, Martha Stewart, André Soltner, Rick Bayless, Anne Burrell, Danny Meyer, Amanda Freitag, Jean-George Vongerichten, Masaharu Morimoto and many more.

In 1993, Yamaguchi became the first chef from Hawai‘i to win the coveted James Beard Foundation Award for Best Chef: Pacific Northwest, helping to put Hawai‘i’s cuisine on the map for curious diners. Today, as co-founder and co-chair of the Hawai‘i Food & Wine Festival (HFWF), he continues to spotlight Hawai‘i as a premier epicurean and cultural destination while promoting local culinary talent and the diversity of rich agricultural offerings grown and raised locally.

Yamaguchi’s AugieTM Award comes on the heels of another momentous recognition, this time from the University of Hawai‘i at Mānoa’s School of Travel Industry Management (TIM School) at the Shidler College of Business. In April, Yamaguchi was honored with the Legacy in Tourism award for his many contributions in the community and dedication to putting Hawai‘i’s diverse culinary scene on the map. In addition to his philanthropic work through HFWF—which has given more than $3 million to support local beneficiaries committed to culinary and agricultural education, sustainability and cultural programs in Hawai‘i—Yamaguchi extends his generosity to the next generation of culinary and hospitality professionals as board member of CIA, the Culinary Institute of the Pacific, and 2021 TIM School guest lecturer.

ABOUT HAWAI‘I FOOD & WINE FESTIVAL
The Hawai‘i Food & Wine Festival is the premier epicurean destination event in the Pacific. The Festival features a roster of more than 150 internationally renowned master chefs, culinary personalities, sommeliers, mixologists, and wine and spirit producers. Co-founded by two of Hawai‘i’s own James Beard Award-winning chefs, Roy Yamaguchi and Alan Wong, the Festival showcases culinary experiences, wine tastings, cultural engagement and exclusive dining opportunities with dishes highlighting the State’s bounty of fresh, local produce, seafood, beef, poultry and spices. Since 2011, the Festival has given over $3 million to support local beneficiaries committed to culinary and agricultural education, sustainability and cultural programs in Hawai‘i.