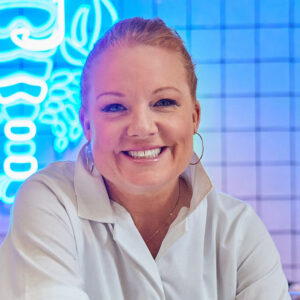 Chef and Restaurateur Tiffani Faison has made a name for herself nationwide for her dynamic personality, culinary prowess, and fierce work ethic. Under Big Heart Hospitality, her Boston based restaurant group, she creates restaurants that are warm, inspired and instantly loveable.

Since the opening of Sweet Cheeks Q in 2011 where Faison blew Boston away with her Texas-style barbecue, she has kept diners on their toes, unafraid to shatter expectations about what she might do next. There is Fool’s Errand and its snack forward menu; Orfano with subversive Italian American offerings; Dive Bar, riffing on both Southern and New England seafood; Tenderoni’s, serving old school pizza and grinders; and Bubble Bath, where champagne brilliantly meets hot dogs and popcorn.

Marking her many culinary achievements, the James Beard Foundation has nominated Faison as “Best Chef: Northeast” four times (2018, 2019, 2020 and 2022) and Boston magazine awarded her “Best Chef: General Excellence” (2016). The Boston Business Journal has twice named Faison to its “Power 50” list; The Boston Globe named Big Heart Hospitality as “Restaurateurs of the Year,” and Eater named Tiffani “Empire Builder of the Year.”

Outside of the kitchen, Tiffani Faison continues to be a rising star on The Food Network, whether competing against the world’s greatest chefs on Tournament of Champions, or serving as a judge on Food Network’s Chopped, Guy’s Grocery Games or Beat Bobby Flay. She is on the Board of Directors for Women Chefs and Restaurateurs and Boston Alliance of Lesbian Gay Bisexual Transgender Queer Youth, and was appointed to The Commonwealth of Massachusetts’ Restaurant Promotion Commission for her commitment to the state’s restaurant business.