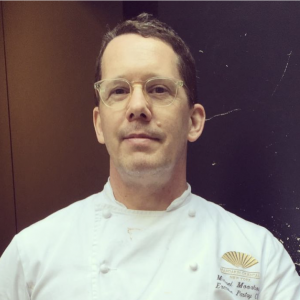 Michael Moorhouse is the Executive Pastry Chef for the Mauna Kea Resort.

Having worked at several New York City restaurants through 2004, he made a move to London and was the Executive Pastry Chef at Marlon Abela’s 2-Michelin star restaurant in London’s Mayfair neighborhood overseeing a five-person pastry team.

Moorhouse’s  culinary journey eventually brought him to Hawaii and the Halekulani Hotel in 2006 where he led an 18-member pastry team to produce and serve desserts at House Without a Key, Orchids and La Mer – Hawaii’s longest consecutively ranked AAA Five Diamond award-winning restaurant.

Making a move to the Big Island in 2018, Moorhouse worked for a few years at Kilauea Loge and was also the Chef Proprieter of Georgette in Volcano, HI before ultimately coming to his current placement at the Mauna Kea Beach Resort.

Moorhouse’s mission is to put substance over spectacle, to continuously seek a balanced life, to show humility, to demonstrate an unending curiosity and to always express gratitude for all that he has.