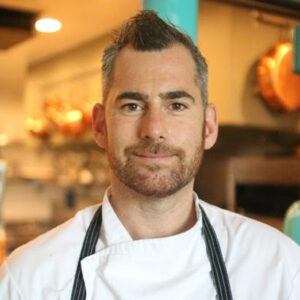 With the opening of Kali Restaurant in 2016, Chef Kevin Meehan’s broad 25-year culinary career reaches its apex. At the Michelin starred Kali, Meehan, whose deft hand was cultivated in Los Angeles’ most prestigious kitchens, joins forces with long-time friend and professional colleague, Drew Langley—previously the wine director at the iconic Michelin-starred Providence. For Kevin Meehan, Kali represents the evolution of not just Kali Dining—his roving private dinner pop-up—but the rigorous years he spent refining his craft. The contemporary California restaurant blends the precision and hospitality of the white tablecloth kitchens where Meehan developed his culinary acumen, with the accessibility and ease of a local’s favorite neighborhood haunt.

Born and raised in Long Island, New York, Meehan’s initial foray in the industry was at a fried chicken joint when he was a teenager. While most would be turned off by working the fryer, Meehan was feeding an innate attraction to food, and, in the process, unearthing what would become a life-long love affair with the restaurant world. After graduating high school, Meehan enrolled in the esteemed Culinary Arts program at Johnson & Wales University in Providence, Rhode Island, an education that he would test and sharpen on-the-line during an apprenticeship at the Michelin-starred L’alban Chambon under French Master Chef Dominique Michou, and, later, alongside Los Angeles’ finest chefs.

In 2000, Meehan drove cross country to assume a post at the celebrated L’Orangerie, then helmed by Chef Ludo Lefebvre. It was there that Meehan met Langley, who he would subsequently work with at the now late Bastide, where Meehan served as Chef de Cuisine, and, later, at Citrine. After Citrine’s closure in 2005, Meehan joined Patina Restaurant Group as Chef de Cuisine at Joachim Spichal’s seminal Patina restaurant in Downtown. During his three-year tenure, the restaurant received a Michelin Star for its fresh interpretation of French cuisine informed by seasonality, and Meehan was consequently promoted to Executive Chef of Café Pinot.

In 2012, Kevin Meehan parted ways with the prolific restaurant group to launch his passion project, Kali Dining. The underground operation quickly garnered critical attention for Meehan’s assertive, yet nuanced tasting menus that he prepared, dinner party-style, for Los Angeles top tastemakers, luminaries, and food enthusiasts. Kali the restaurant was birthed from the success of Kali Dining, and the passion that Meehan and co-owner Langley share for pushing the boundaries of the typical fine dining experience.