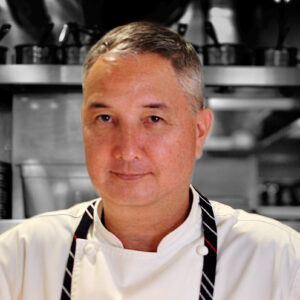 Chef Keith Steel Kong is the force behind the food vision and menu at BASALT. Born and raised on Oahu, Chef Keith was first introduced to the culinary world by his parents who were avid travelers and taught him that there was a world of food to explore. After graduating from Punahou School in Honolulu, he began his culinary exploration at Colorado State University, where he worked his way up from dishwasher to cook at a restaurant owned by a Hawaii couple. This was the beginning of his culinary training that led him to study in San Francisco at the California Culinary Academy, graduating with honors in 1987, and at the Culinary Institute of America.

Kong’s cooking style has no labels. He loves simple foods and for him olive oil, salt, and pepper are the three most important ingredients a chef can have in making great food. At BASALT the foundation is quality ingredients first, then adding in the layers of more complicated elements and weaving them together to create dishes that will satisfy every taste bud. Through this philosophy, Kong has created a sophisticated, yet relaxed dining experience infused with the spirit of our island paradise. He draws inspiration from local ingredients and traditional Hawaiian recipes, while saluting Oahu’s life-long heritage of multiculturalism.

Kong is particularly proud of his work bringing along young chefs. To this end, he has created two hugely successful mentoring programs for culinary students at Kaimuki and Farrington high schools. Since their inception, the programs have helped hundreds of young men and women embark on culinary careers. Maelani Iokepa, his very first intern, now works alongside him as the sous-chef at BASALT.

Prior to joining the ABC Store’s culinary team that opened BASALT in 2017, Keith Steel Kong was the Executive Chef at Duke’s Canoe Club in Waikiki from 2002.

Kong’s daughter Grace taught him to always smile and laugh, and not be defined by the obstacles in life. Keith and his wife, Caroline, their three children and five grandchildren (soon to be six) follow that philosophy every day in her memory. 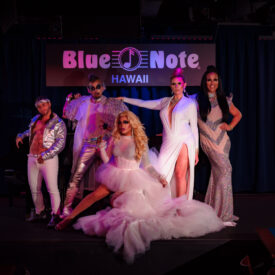