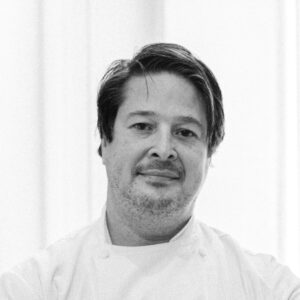 After studying business at the University of Arizona, Jason Fox began his culinary career in San Francisco at Bizou under Chef Loretta Keller where he was introduced to the varied landscape of California’s ingredients, widening his culinary scope. Fox continued to work in kitchens throughout the city, spending time at Stinson Beach Park Café and Scott Howard before landing his first chef position at Bar Tartine. There, Fox developed the skills and relationships that led him to become Co-Owner and Executive Chef of Commonwealth.

At Commonwealth, Fox’s fine dining menu focused on local California produce combined with modern techniques and flavors from across the world. The restaurant was awarded 1 Michelin Star. In addition, he was nominated as a James Beard Award semifinalist for Best New Restaurant and received accolades from the San Francisco Chronicle and beyond. Making Commonwealth a truly community focused restaurant, a portion of the profits were donated to local charities.

As Executive Chef of San Francisco Proper Hotel, Jason Fox leads the hotel’s four unique dining outlets: the rooftop bar, Charmaine’s, the Lounge at San Francisco Proper, La Bande and Villon. From fine dining to elevated bar snacks, Chef Fox brings his extensive knowledge of progressive California cuisine and beyond to the property and draws on local ingredients and worldly flavors. Aligning with his personal passions, Proper Giving donates 1% of Proper Hotel’s time, hotel space, and management fees towards the betterment of surrounding communities, offering human, physical and financial resources to those in need.