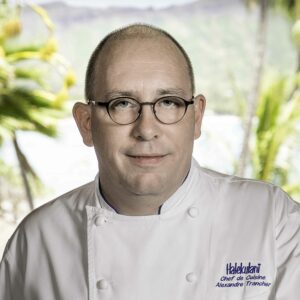 With a broad history of culinary experiences and a number of Michelin-starred restaurants under his belt, Alexandre Trancher continues the legacy and culinary vision of the Halekulani hotel as chef de cuisine of AAA Five Diamond Restaurant and Forbes Five Star Restaurant La Mer.

After earning his degree in culinary arts from Ecole du Sacré Coeur in Saint-Chély d’Apcher, France, Trancher began his globe-trotting career as the sous chef for Hotel de Vendôme and La Tour D’Argent in Paris. After earning the title of executive chef, Alexandre Trancher moved to Athens, Greece to lead the kitchen at Hotel Pentelikon’s one-Michelin-star Vardis Restaurant Athens. His journey continued as he moved on to be executive chef of the one-Michelin-star La Tour D’Argent in Tokyo’s New Otani Hotel.