Chef David LeFevre, a native of Madison, Wisconsin, developed his passion for cooking as a child by helping his Mother in the kitchen. He says “I loved the food my mother made and realized that if I knew how to cook, I wouldn’t have to wait for someone else to cook for me.” Yet as a teen he set off on the Industrial Engineering track at the University of Wisconsin, temporarily forgoing his culinary pursuits. Of course it wasn’t long before LeFevre left the Engineering world and, after working in various restaurants, enrolled at the renowned Culinary Institute of America. It was during this time that he interned at Chef Charlie Trotter’s celebrated restaurant in Chicago and made such an impression that he landed a job as tournant at Trotter’s Las Vegas, where he worked until it closed in 1995.

In parting with Trotter’s, LeFevre seized the opportunity to travel to France and hone his classical skills in some of the world’s most distinguished kitchens. This experience enhanced his resume with a list of apprenticeships that include the late Bernard Loiseau’s restaurant, La Côte d’Or, Restaurant Jean Bardet and Roger Vergé’s Le Moulin de Mougins. Upon returning to the United States, LeFevre moved to Chicago to once again work with his mentor Charlie Trotter where he quickly advanced to become sous chef.

In addition to pursuing his responsibilities in one of America’s top kitchens, LeFevre also participated in over fifty national and international culinary events during this time. Additionally, he cooked alongside some of the world’s best chefs, heads of state, and at the James Beard House, and developed recipes that ultimately appeared in several of Trotter’s award-winning coffee table cookbooks. As a representative of Trotter’s, LeFevre contributed to the production of the PBS television series, Kitchen Sessions with Charlie Trotter and had the extraordinary opportunity to work with visiting chefs like culinary masters Alain Ducasse, Michel Trama and Gordon Ramsey.

In 2002, LeFevre decided to explore new and exotic cuisines, which launched him on a two year globetrotting experience all over Southeast Asia, Japan, Australia, the Caribbean, and Europe. He consulted, made guest appearances and conducted promotional events in destinations as diverse as Singapore, Bangkok, Stockholm and Tokyo by teaming up with leading hoteliers and restaurateurs.

When not in the kitchen, LeFevre enjoys riding his bike around his Manhattan Beach neighborhood and turning up the volume on some great tunes. 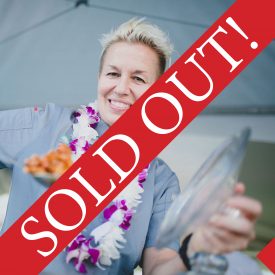